Comeback is a Raven appearing in Armored Core 3. He is affiliated with Global Cortex and ranked D-1 in the Arena. He is partnered with Caller in the Extra Arena and they hold the title of the fifth highest ranked team.

Comeback was one of the many Ravens contracted by Union to help destroy the generators of the Crest's Data Storage Facility. The strike included him, Flying Fix, Royal Mist, Twinhead-W, Yellow Boat, Valkyrie and The Raven. Once they reached the facility, the Ravens split up to clear out the different sectors of the facility in search of the generators. Comeback was able to clear out sectors S-04, S-16, and C-13. He started off slow at S-04 before picking up the pace. Comeback survived the mission and began to take on more significant and dangerous missions alongside The Raven.

Joker is a lightweight hover AC equipped with an overboost core, back mounted rocket launcher, back mounted missile launcher, hand rocket and laser blade. The unit is built for fast close-range combat.

Comeback can be hired as a consort during the mission, Destroy Massive Weapon.

A slow starter, it's not that often that he finds his rhythm before the tide turns against him. Every now and then though, something clicks and he's able to regain lost ground. He's earned a loyal following by keeping spectators on edge.

Comeback will tend to use his missiles at longer ranges while reserving his rockets for mid to close-range combat. When next to an opponent, he will attempt to strike with his laser blade.

Given the triple rockets that he fires close-up, the best way to defeat Comeback is to keep him at mid range while dealing damage. His missiles can be avoided fairly easily and his triple rocket will spread too far apart to do major damage. Given his speed, it is advised to use a quick firing weapon that doesn't rely too heavily on the enemy to be moving slowly. As the fight progresses, he will occasionally fly up while firing. 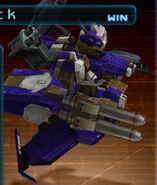 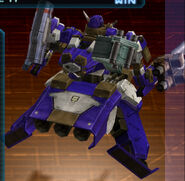 AC Joker - Back Shot
Add a photo to this gallery

The name Comeback refers to the return of a person of public interest after a long-term hiatus or when an entity recovers from a large deficit to achieve victory.

The name Joker refers to a unique playing card found in most modern card decks, as an addition to the standard four suits (clubs, diamonds, hearts and spades). The often colorful card has a rich history, and varying interpretations depending on specific card games and their rules.

Retrieved from "https://armoredcore.fandom.com/wiki/Comeback?oldid=50847"
Community content is available under CC-BY-SA unless otherwise noted.