The F21C Stork is an ultra-heavy lift helicopter used by many different organizations to transport a variety of units. In Armored Core V, it is seen mostly transporting ACs into battle, but can also be modified to carry other cargoes.

The Stork employs tandem rotors to maximize its lift capability. Carried on its large, boxy compartment is a folding parts garage, capable of carrying most AC part and presumably, equipments to repair and refit an AC.

One of the Stork's features is its folding legs, capable of landing over a wide area of terrain, ensuring it can land just about anywhere. For this reason, Migrants often possess Stork helicopters, sometimes to the exclusion to other transport methods, such as the more widely available flatbed trucks.

In Armored Core: Verdict Day, the F21C Storks have been replaced by newer, higher end models, designated as the SCHWAN A-448. They also have different variants, and some of them have weapons fitted onto them.

The F21C Stork is widely recognized by its bulbous cockpits. Later, post-Father era Storks can also be seen spotting a much more armored, rectangular cockpits. Some Storks can even mount armor packs on its forelegs, creating a sort of a directional shield with which to defend attacks from.

There is a variant of the F21C called the B-44 Rokh. Instead of cargo bays contained within the two pods to either side it contains missile launchers and has two additional armor plates protecting the cockpit. Highly maneuverable and armored compared to conventional attack helicopters (such as the ubiquitous yet woefully under performing F17 Flamingo gyrocopters or the obsolete A66/2 Hawk attack choppers), B-44s are sometimes deployed to assist even ACs in combat, as their mobility and firepower can greatly aid ground combatants. Of course however, a lone Rokh is still no match for an AC.

In Armored Core Verdict Day, the Stork helicopters come in the form of the SCHWAN A-448s. They often appear in cutscenes as well as occasional enemies. Normally, they appear as enemies when they come to reinforce ACs or when they're refueling. The most common type encountered is the SCHWAN A-448/C. There's also the rarer SCHWAN A-448/L type. The SCHWAN A-448/C in this game can be fitted with dual laser cannons or dual autocannons, both possessing significant damage power. Other variants of the Stork included the SPECHT A-448 and the ADLER A-448.

The B-44 Rokh also makes an appearance in Verdict Day, in the form of the GEIER A-448/L. This variant is much more mobile than its predecessor thanks to improvements in engine and motor output technology. But they are ultimately still not a match for an AC due to their limited durability and poor resistance to certain damage types. 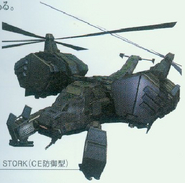 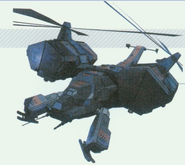 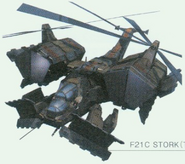 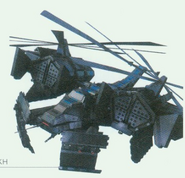 B-44 Rokh, painted with The Corporation's paint scheme. 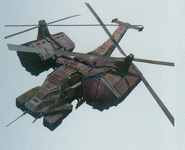 Fatman's Stork (AC: VD)
Add a photo to this gallery

This article is a stub. You can help Armored Core Wiki by expanding it.

Retrieved from "https://armoredcore.fandom.com/wiki/F21C_Stork?oldid=57976"
Community content is available under CC-BY-SA unless otherwise noted.