Flying Fix is a Raven appearing in Armored Core 3. Her rank is B-6 in the Arena. In the Extra Arena she is partnered with Grand Chief and they hold the title of the third highest ranked team.

Flying Fix was one of the many Ravens contracted by Union to help destroy the generators of the Crest's Data Storage Facility. The strike included her, Comeback, Royal Mist, Twinhead-W, Yellow Boat, Valkyrie and The Raven. Once they reached the facility, the Ravens split up to clear out the different sectors of the facility in search of the generators. Flying Fix was in the process of clearing out Sector N-41 when she began running out of ammunition. With The Raven's assistance, she was successfully able to clear out the Sector and retreat.

Flag is a ridiculously well armored, tank leg AC equipped with an overboost core, a decoy dispenser inside weapon, extension turn boosters, two identical slug guns on both back weapon slots, a spread bazooka and a close-range flamethrower. It sports high AP, Defense and Cooling. The units mobility and energy capacity are also strengthened due to being equipped with OP-INTENSIFY. The unit is also shown to be overweight but the OP-I attributes render this a nonissue.

Strangely, in the Portable version of Armored Core 3, Flying Fix is actually equipped with the KWI-EM/10 ECM makers as inside parts rather than the decoy dispensers she originally had on her AC in the PS2 version, despite the parts list saying otherwise.

Flying Fix is one of the many Ravens that participate in the mission Assault Crest Facility. During the mission, The Raven encounters and assists her in clearing out Sector N-41, fighting two security MTs and two turrets. After the fight, she retreats given that she has nearly run out of ammunition.

Having spent a number of years working as a mechanic, she finally decided that the time had come to pilot one of her own. All too familiar with the danger of Arena combat, she operates a heavily armored AC and prefers to fight from mid-range.

Flying Fix's slow movement is often punctuated with incredible burst of speed using OB at random accompanied by ECM being deployed. Fighting her on the ground and at close range is a very bad idea. Her slug cannons pack a punch at close range and her flame thrower does not improve matters. Stay at a distance and either pound her with heavy weapons like the linear cannon or grenade launchers, or wait her out with a machine gun and quick AC. The second option can be a pain. Unless using missiles, Flag makes an easy and stubborn target. 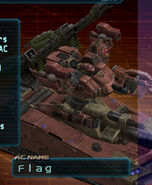 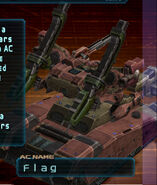 AC Flag - Back Shot
Add a photo to this gallery

The name Flag refers to a piece of fabric with a distinctive design that is used as a symbol, as a signaling device, or as decoration.

Retrieved from "https://armoredcore.fandom.com/wiki/Flying_Fix?oldid=53033"
Community content is available under CC-BY-SA unless otherwise noted.