For the second pilot of White Glint that appears in Armored Core: For Answer, see Anatolia's Mercenary.

Joshua O'Brien is a Lynx appearing in Armored Core 4. He is the pilot of the first version of the legendary NEXT, White Glint. He is affiliated with the corporation Aspina and serves as the Mercenary's partner and rival. He has a laid-back, friendly attitude as well as a gentlemanly nature. He also has an extremely high AMS aptitude and is a skilled fighter.

Joshua O'Brien was a Lynx that was affiliated with the NEXT development corporation Aspina in testing the AMS control system. His homeland, the independent colony of Aspina was precious to him and served as his central motivation for fighting. He constantly struggled to keep it away from tyrannical rule during the Pax Economica. His connection with the Operator Fiona Jarnefeldt may have been the means through which he developed a solid friendship with Anatolia's Mercenary who was fighting for a similar cause. He fought during the Lynx War, siding with Omer as it had close ties with Aspina. His experiences culminated in the mission where he assisted the Sing Colony. It is here where was able to destroy a fair number of Sol Dios weapons alongside Anatolia's Mercenary. Although he did not participate in the Battle at the Abandoned City, he did deliver the finishing blow which destroyed Akvavit. Afterwards, he was swayed to pilot the 00-ARETHA, a prototype NEXT. He was ordered to attack Anatolia and was ultimately defeated by Anatolia's Mercenary. He died when the 00-ARETHA's Kojima reactor exploded.

Joshua O'Brien is known for having a laid-back and cordial attitude when facing off against enemy pilots. He shows a sincere respect for his opponents introducing himself upon reaching the battlefield.

Joshua O'Brien's NEXT is a white light bipedal unit called White Glint. It has a SALAF core, HOGIRE head, and JUDITH arms and legs. It is armed with a Rosenthal assault rifle, Omer Science Technology laser blade, and back laser cannon. This white NEXT is designed for extremely high speeds, and gained its name for being so fast that it appears only as a "white glint" to witnesses. Its main and side boosters are Aaliyah, its back is Hogire, and its over booster is a Pallas. It has a Judith FCS and a Rayleonard Maxwell generator. Despite minimal armaments, the unit is quite capable of effectively fighting other NEXTS as well as the Sol Dios, a testament of both the pilots skill and the capability of White Glint.

Any not listed are 0 Points

Joshua O'Brien is a Lynx affiliated with the NEXT development corporation Aspina testing the AMS control system. Throughout the game, he plays the role of Anatolia's Mercenary's partner and sometimes rival, depending on the situation.

Joshua's strategy is to use his extreme speed to outmaneuver his opponent. Often staying at mid-range, he will whittle away at enemies with his assault rifle, while taking occasional shots with his laser cannon. If an enemy gets too close, he may use his laser blade before retreating to a safe distance. The best ways to eliminate him is to use heavy weapons or to use tracking weapons that can keep up with his speed (mainly missiles). 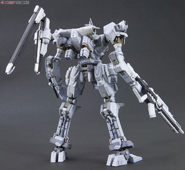 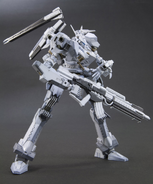 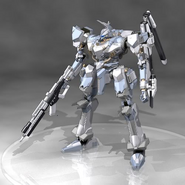 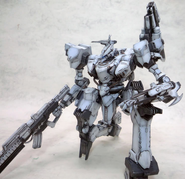 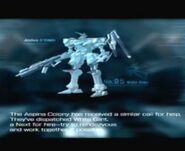 The word White Glint, the name of Joshua O'Brien's NEXT, refers to a small flash of light reflected off a surface.

Retrieved from "https://armoredcore.fandom.com/wiki/Joshua_O%27Brien?oldid=60502"
Community content is available under CC-BY-SA unless otherwise noted.