Kojima Technology is a recent breakthrough in mechanical engineering that was first developed in a joint venture by Akva Vit and Rayleonard, and soon after replicated by Omer Science Technology. Kojima Particles, so named after the original scientist responsible for discovering them, represent a treasure trove of possibilities in warfare, and are the defining part of what allows NEXTs to outclass their forbearing Normals so easily.

Kojima particles are normally shown to be glowing green particles that remain airborne for long periods of time; this holds especially true in colder climates, as demonstrated in the mission Empress, where high density Kojima Particles are shown to be visible and in vast quantities. Kojima particles have the rare habit of turning semi-solid when they collide with each other, as shown when a NEXT uses a VOB unit, where the air that the NEXT passes through compresses the Kojima energy around the craft, making the "Primal Armor" visible.

When applied to boosters, they allow both Quick Boosting, which give NEXTs bursts of speed surpassing the 1000 km/h mark to become blurs of steel and color, compared to Normal's plodding speed, and Over boosting, letting NEXTs traverse large distances with ease, whereas a Normal would be forced to simply boost normally.

As the new NEXTS were designed, the scientists designing them came up with the idea of trapping Kojima Particles in a spherical force-field around the NEXT. As an object passes through the field, its energy compresses the particles in front of it to a solid state. The foreign object is meant to be halted by the solid wall, or even destroyed by the Kojima particles' habit of rapidly eroding through solid matter that come into contact.

As tests proved the theory to be correct, the Primal Armor had been invented, making most weapons do significantly less damage. It does, however, seem that energy-based weaponry have a greater ability to pierce through Primal Armor due to the rounds being made of a non-solid matter which, in turn, do not compress the Kojima particles as much as a solid shell can. However, weapons that fire non-solid rounds do not seem to damage the Kojima shield as much as a solid round.

When used in weapons, they are capable of causing massive eroding damage and Kojima contamination. Offensive Kojima weapons were first developed by Akva Vit, then by Global Armaments (Europe) and, after the Lynx War, Torus and Omer Science Technology. Various forms of these weapons exist; there are Kojima cannons, which charge large amounts of Kojima Particles, then proceed to fire them as one, cohesive beam. There are also Kojima missiles, which carry a volatile Kojima payload and do significant damage upon impact, and Kojima "blades," which utilize a directed, pin-point, close range Kojima explosion that has the appearance of the user punching the target, as if using a physical parry blade.

Sol Dios Cannons are larger, battleship versions of Kojima cannons, and have been shown to demonstrate another characteristic of Kojima particles: Kojima Boosting. In For Answer, mobile Sol Dios cannons are able to disconnect from their mountings and move rather quickly despite a lack of any apparent thrusters for maintaining altitude. This brings in the possibility that Kojima Particles can be used as a direct method of boosting instead of just Overboost.

Rayleonard's Ehrenburg anti-satellite cannons are also implied to be giant Kojima cannons (surpassing even Sol Dios) as evidenced by its need to charge and the large Kojima detonation that occurs when it is destroyed. It also maintains Primal Armor at its base to protect its power grid.

While capable of being used for many different roles, Kojima Particles have the significant drawback of being extremely radioactive and highly polluting. During the National Dismantlement War, contamination levels were low, due to limited NEXT action in the short, one-sided conflict. But, during and after the Lynx War, massive Kojima contamination caused the Earth's surface to be extremely polluted; for instance, areas such as the Kitasaki Junction and the Old Clark Area have undergone complete desertification, making it uninhabitable for human life.

Another issue with Kojima pollution is the range as well. For instance, in Armored Core 4 mission "Retribution," the player is not allowed to use their Primal Armor even when it is what appears to be several miles away from the Anatolia colony, implying that Kojima Particles, once released, not only spread over a wide area, but also are lethal when activated for anything other than the shortest periods of time. There also appears to be no way to control or limit this pollution once it has been released in the environment other than the discontinued use of Kojima technology. During the course of Armored Core: For Answer's ORCA Path storyline, Maximillian Thermidor indicates that eventually, the Kojima Particles and other forms of pollution from the surface of Earth will eventually reach the Cradles, floating seven kilometers above sea level.

Kojima Technology has uses outside of warfare, as well. The Companies have been utilizing it for power, as seen by BFF's Sphere facility and the Kojima generators in Torus's B7 Mining Facility. They also use Kojima from the arteria facilities to power the cradles, and the Arms Fort Answerer appears to use Kojima reactors for power (though the reactors also give it an amazing Assault Armor ability, as well as a super-sized Primal Armor.

Kojima Particles as seen in the NEXT hangar 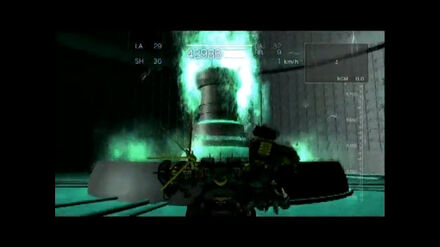 Kojima Reactor as seen in B7 in For Answer 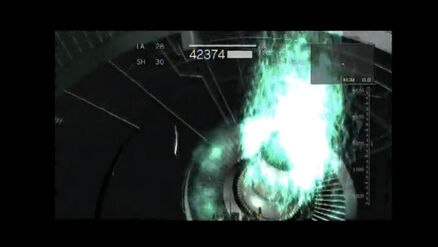 Another shot of the Kojima Reactor
Add a photo to this gallery
Retrieved from "https://armoredcore.fandom.com/wiki/Kojima_Technology?oldid=58316"
Community content is available under CC-BY-SA unless otherwise noted.