"White Glint... all those silly legends. They die today. I've surpassed you, and now I'll prove it."
— Otsdarva to Anatolia's Mercenary

Otsdarva is a Lynx that appears in Armored Core: For Answer. He is ranked as the #1 Lynx in Collared.

Formerly from Rayleonard, this is Omer's trump card. His home is the battlefield, where he developed ingenious battle strategies. His mid-range attack style ignores all limitations of his LAHIRE frame, evidence of his estrangement from Omer.

Undoubtedly Collared's most powerful NEXT.

Serving as Collared's top Lynx pilot, he has had considerable experience on the battlefield and this very clearly shows since his second appearance in the mission Defeat White Glint. He is ultimately one of the few pilots capable of defeating Anatolia's Mercenary and he expresses confidence in having surpassed his abilities. During either this mission or Defend Line Ark, his NEXT ends up sinking into the ocean due to a disabled main booster and is presumed to be KIA. It is later revealed in the final missions down the ORCA and Destruction paths that Otsdarva had faked his death and assumed the role of Maximilian Thermidor. Whether this was intentional or not, The League's leadership is also leading ORCA.

Piloted by Otsdarva; formerly associated with Rayleonard, the Omer made TYPE-LAHIRE NEXT is equipped with parts that have a fair resemblance to that of Zanni's NEXT, Roughcut, in armament.

With an overall intermediate to high performance, the blue and grey Stasis stands firm for its position as the rank 1 NEXT; only being second to White Glint and Fragile in terms of the LYNX's capabilities (i.e. Anatolia's mercenary and CUBE). The player can determine the role that Stasis plays depending on the player's siding; either having Ostdarva to support the player in the 2-on-1 attempt to defeat White Glint, or having White Glint on the player's side opposing Otsdarva and CUBE. Regardless, Stasis falls in both appearances due to a supposed booster malfunction; a part of Otsdarva's plan to return to ORCA as Thermidor.

Note that if you manage to get Stasis stuck within the Line ark central structure, all these advices are useless. Assault Armor, grenades, even large missiles, as long as he stays stuck, all you have to do is to close your eyes and pull the trigger. Strengths: As his rank suggests, he is a skilled opponent and good at taking advantage of Stasis's strengths. You will face him in the mission "Defend Line Ark", "Attack Arteria Cranium (hard mode) and "Occupation Aeteria Carpals". His strategy is to outmaneuver the opponents and shoot them apart while they can't shoot back.

In his Left hand, he has equipped an ER-0705, a powerful mid-range laser bazooka with impressive attack power and stunning rate of fire. In his Right hand, an assault rifle type AR-0700, gives him a reliable secondary weapon with moderate rate of fire, average power and good Anti-PA abilities.

Sometimes he will take Stasis away from the hotspot and use its back-mounted missile launcher, type MP-0901, a weapon that launches 4 accurate and mobile missiles vertically.

He will then run down to hit the target when it tries to evade the missiles, either way, the one he's aiming for is either going to get hit by the missiles, a high power laser round and a burst from his assault Rifle, or all three, in the worst case maybe even an AA attack. The best thing to do is to OB away or use flares while constantly keeping an eye on Stasis's movement. He can inflict a lot of pain if you don't take him down quickly, so in essence, the battle will always be a damage race.

Weaknesses: Otsdarva is Rank 1 for a reason, he is very good at dodging, almost no weapons can hit him when he's in the QB rave mood. HOWEVER, these intense QB sequences does deplete Stasis's energy reserves quite quickly, and he will occasionally fall to the ground/water after boosting around a lot, that's the GO. As Stasis's vertical EN cost is just above the NEXT's recharge rate, his boosters will use up all new energy preventing QB, while the boosters also keeps his speed of decent slow. Missile weaponry is useful to distract Otsdarva to deplete Stasis's EN, due to their low damage, one should not use them to damage him while he falls.

Main Strategy: Due to his light armor and their large blast radius, grenades are efficient at close range (150-250 metres) after using machine guns to deplete his PA, preferably while he is still working to get away from your missiles, bazookas are also great against him while he falls, especially the shotgun ones retrieved from Wonderful Body (Don Colonel ) as their total damage allows them to do more damage per round than any other solid shell weapon.

Energy based weapons are not advised due to their either good PA penetration but relatively low damage, high damage and good penetration, outweighed by low velocity as well as low ammo count, or their great damage and incredible PA attenuation, which is outweighed by their high weight and generally extreme EN requirements, which will make it impossible for the player to keep up with Stasis in a speed race that Otsdarva will force the player into.

If the player still wants to beat him with EN weaponry, the best choice might be the ER-0705 laser bazooka due to its (for an EN weapon) low EN use and weight compared to power, as well as quick re-fire rate, allowing a lot of damage to be inflicted within a short period of time. The best thing to do might actually be to enter the Design option and copy Stasis, then switch the main and back boosters to the Latona ones, while grabbing some of the PA tune points and put them where deemed useful.

To make it simple, get Stasis's EN low using light missiles, deplete its PA with machine guns and then make full use of the situation by blowing it sky high using light grenades or other high powered weaponry. 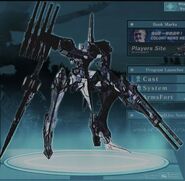 Retrieved from "https://armoredcore.fandom.com/wiki/Otsdarva?oldid=56705"
Community content is available under CC-BY-SA unless otherwise noted.