Project Phantasma was a project designed by the Doomsday Organization that was designed to integrate humans into new weapons. This is very similar to Human PLUS, but it could be argued that this had far more drastic changes to the users of this system.

Currently there have been two known Phantasma MT's that were produced. The first is a gold yellow colored machine that has a machine gun and vertical missiles. In the remake version of this MT in Armored Core Nexus, Phantasma has a plasma cannon replacing the machine gun.

In design, Phantasma resembles an ancient sea monster with a slender body, two arms sticking out of the side and a short sleek head. The machine was fairly durable and could easily take down an AC. In Nexus' Revolution disk, two Phantasmas appear but it is doubtful that this is canon as this mission was a flavor mission after the main remake.

In combat the Prototype Phantasma (named for concept art) features a plasma cannon on the front gun with vertical missiles from the sides. It tends to be fairly immobile which makes it vulnerable to missiles, like so many MTs. However against a tank, Phantasma is a brutal opponent.

The second model appears after Stinger has merged with Phantasma. This is evidenced by referring to himself as Phantasma. This model is very powerful and far more durable than the prototype model. This model featured large missiles along with normal vertical and an extremely powerful laser attack that could quickly rip apart an AC. It also featured a machine gun weapon mounted in the front. This weapon was shown when Phantasma began to draw in energy and then fired off a horde of multi-colored laser blasts in a sphere shape around the machine.

It is nearly impossible to dodge the attack if one gets caught in it but it can successfully be evaded if the AC can stay between the barrages. Combat against this machine is a damage race, with Phantasma barely moving but capable of absorbing massive amounts of damage. This version, along with Stinger, Phantasma and Nine-Ball Seraph, appear in Armored Core 2: Another Age in the final area, Lost Field. This version retains the multi-colored laser blast, normal vertical missiles and large missiles and also features a plasma cannon replacing the machine gun weapon used by the one in Project Phantasma. It also appears to be more mobile.

In the two encounters that the player had with Phantasma, it was destroyed. It is assumed that, with the destruction of the Doomsday Organization and the final model, Phantasma was completely destroyed.

Prototype Phantasma from the side in Armored Core: Project Phantasma

Prototype Phantasma from the front in Armored Core: Project Phantasma

Prototype Phantasma from the back in Armored Core: Project Phantasma 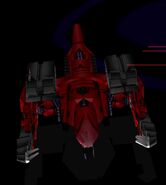 Phantasma in Armored Core 2: Another Age
Add a photo to this gallery
Retrieved from "https://armoredcore.fandom.com/wiki/Project_Phantasma?oldid=52066"
Community content is available under CC-BY-SA unless otherwise noted.