Ravens' Nest HQ is a location in Armored Core. It is the Ravens' Nest headquarters, appearing quite technologically advanced.

Ravens' Nest HQ is a large data facility owned by Ravens' Nest. Is made up of a few winding corridors separated by large platform rooms and one vertical cube room. These cubes appear to possibly be floating data terminals. The site features a very high level of security with numerous MTs defending it. Upon entering further into the facility all the way into the central terminals, the very same type of technology found in Old Military Facility is seen here. The Raven is lured into the facility by a request to clear out floating mines. This is ultimately a trap set forth by an AI core. Upon entering the central terminals, The Raven faces off against two Nineball units destroying both of them. He/She then proceeds to the AI Core, destroying it and preventing the future from being further controlled and manipulated.

One of the early winding corridors leading into Ravens' Nest HQ. 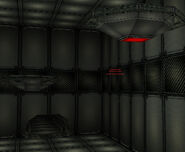 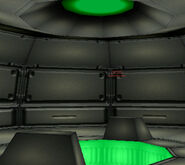 The elevator leading into the facility. 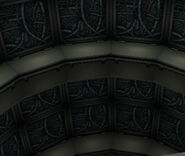 The central terminals with advanced technology. 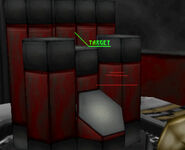 The AI Core at the Nest's center.
Add a photo to this gallery
Retrieved from "https://armoredcore.fandom.com/wiki/Ravens%27_Nest_HQ?oldid=37428"
Community content is available under CC-BY-SA unless otherwise noted.