Ruins of Vaella is a location in Armored Core. The site was built pre-destruction and appears to be a series of winding catacombs.

The Ruins of Vaella are found in the eastern Dragna region on the surface. Given their layout and the well-like gaps along ceilings and floors, it is very likely the site was built as a temple or catacombs. This is supported by the fact that there are no doors connecting some of the rooms. There are a series of traps which show the advanced technology of the pre-destruction civilization. Statues along the walls fire large spherical bursts of energy which can cause damage to ACs. The site is used as a hideout for Struggle in its dealings with Murakumo. It is attacked by Chrome who send The Raven to kill its leader and eliminate the terrorist group.

Ruins of Vaella is an area of combat in the mission Kill "Struggle" Leader.

One of the large empty rooms located within the ruins. 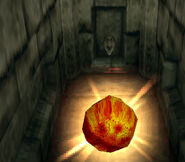 One of the statues which fires spherical bursts of energy.
Add a photo to this gallery
Retrieved from "https://armoredcore.fandom.com/wiki/Ruins_of_Vaella?oldid=37559"
Community content is available under CC-BY-SA unless otherwise noted.