A mobile weapon of the Corporation, the Scavenger is one of many advanced unmanned weapons in Armored Core V. Although it is not considered an AC, its mobility and firepower highly resembles one. With unnatural, beast-like noises and animalistic design, the Scavenger is a frightful and dangerous opponent, often decimating newer players with their combination of speed, power and maneuverability.

In Armored Core V, Scavengers only come in two types: Large and Medium. The only difference is that the Medium-Type is smaller in size.

A new-model Large-Type encountered during Story Mission 9 after Maggy's death, this Scavenger is far superior when compared to its predecessors from ACV, possessing greater firepower and coordination. It comes equipped with the usual laser cannon and missiles, but this version diverges from its precursor by accommodating a new, distinct charge attack, making it far more deadly.

A powerful unit encountered late in the Story Missions, the "HUNTER" variant provides long-ranged support for other units from afar, but do not be fooled: this unit can hold its own. Accommodating a powerful railgun as its main weapon, the "HUNTER" also comes to the field equipped with not one, but two Large Missile Launchers for potent mid-range combat; and a pair of high-damage shotguns for extra damage potential up-close. A dangerous foe both up close and from far away.

There are two types of Scavenger, Large-Type and Medium-Type. However both of them share a very similar design, and are hard to distinguish aside from their size. However, there is a way to differentiate. The Large Type will use a combination of all its attacks, while the Medium-Type only uses the Ramming Attack as its form of offensive.

The Large-Type Scavenger appears in Story Mission 04 and 05. It is very dangerous. Due to the open nature of the map in Story Mission 04, it is very maneuverable and has a lot of AP, making it hard to destroy. Its weaponry can deal a lot of damage; the most powerful of these is the ramming attack. This proves to be the Scavenger's greatest weakness as it stalls after executing the attack, leaving it temporarily vulnerable, allowing the player to attack it. While cover and CIWS is very useful in avoiding most of the Scavenger's attacks, the player must keep constantly searching for it due to the aforementioned mobility advantage. The best tactic (if it can be reached in time) is to wait for it to charge and then slash with a powerful blade. If the player gets lucky and has strong enough blade, the Scavenger can fall easily. Another, more reliable tactic is to use a fast-firing TE or CE weapons. As Battle Rifles typically have slow Muzzle Velocities, close-in rapid fire weapons such as Pulse Machineguns are recommended. Unloading HEAT Rockets on it while it is stalled is also one way to defeat the Scavenger in short order. The same type of Scavenger is encountered in Story Mission 05, but it surprisingly does NOT use the ramming attack at all. Instead, it will be constantly on the move, blasting away at you with its weapons, making the fight with it seemingly harder. However, it still possesses the same weaknesses (weak CE & TE Defense), meaning you can still use Battle Rifles and Pulse Machineguns, although this time you have to preserve some ammo and AP for the following battle with the City Police Captain and Chief.

The final Large-Type Scavenger encountered is in Order Mission 71. This is the most difficult encounter, as the mission requires you to destroy it and a whole host of other enemies within a strict time limit. In addition the area is wide open, playing into the Scavenger's strength, and to top it all off, many enemies are littered around the battleground. Tactics such as employing CIWS, using fast-firing CE/TE weapons and waiting for it to stall after using its charge attack is always useful. Don't forget to mop up other enemies such as the Oothecas and Ammons before taking on the Scavenger, and make sure all enemies before this section has been destroyed to prevent round trips, potentially jeopardizing the mission. Due to the time limit, it is generally inadvisable to use a tank AC (although a coop partner using a tank AC is still useful).

The Medium-Type Scavenger is encountered only in Story Mission 07, as a secret encounter.

In Story Mission 07, there are two Medium-Type Scavengers located off the shown path. The first is located in 2nd level underground just after the narrow path leading to the first train station. Engage the Ammons at the station, and make a U-turn, the Scavenger will be located in the left path (the right path is where the player would have come from). The place is cramped, and although getting hit by its ramming attack will hurt, Hit it with anything you get, and it should be destroyed quickly.

The second Medium-Type Scavenger is located just after the last Supply Point. Before going on the path marked by the line, there is an open path just left of it to another chamber containing the Scavenger (if the player has triggered the dialogue between Fran, Rosary and Chief, the player has gone too far and must backtrack). Quite similarly to the previous encounter, the Scavenger has limited maneuverability, although the increased verticality will slightly complicate matters. However, any CE or TE weapons should still work.

The first Scavenger type to be fought in the story is the HUNTER variant, late in the game. It is in a mission where the player has to eliminate a bunch of Ammon enemies in the Fat Rocks/Flooded area. This unit will continually snipe away at the player while the player deals with the multiple Ammon units. If the player attempts to get close, the HUNTER will employ 2 blue-colored large missile launchers as well as a low damage but high stun shotgun. Dealing with the HUNTER swiftly will require high power CE weapons like H.E.A.T machine guns or battle rifles as the HUNTER is weak to CE damage. High power KE rifles are also effective against the HUNTER unit as its KE defense is also not very high. The unit tends to employ evasive measures so you will have to actively pursue it/flank it.

The second type to be fought in the story is the PREDATOR, encountered alongside another HUNTER unit. This time, the mission takes place in the mountain map in the Far East region. This version is a complete contrast to the HUNTER unit, rather than sniping from a distance, it tends to rush in on its enemies employing its heavy artillery weapons. Among them include a pair of high damage H.E.A.T cannons and high stun KE rockets. The PREDATOR tends to fire its rockets from afar and its H.E.A.T cannons at closer ranges. The strategy to deal with this unit is a little different from the one used for HUNTER. Rather than trying to flank it, the main thing here is to dodge its shots. The H.E.A.T cannons can deal a lot of damage and the rockets tend to knock you back very far. The H.E.A.T cannons are much easier to avoid than the rockets due to their slow muzzle velocity so having a high mobility AC will help greatly in avoiding his shots. In terms of AP and defense, it sports a very high amount of AP with increased defense stats. However, the unit is weaker to KE damage in comparison to the HUNTER unit, so using high-power KE rifles or autocannons will be effective against it. KE rockets or missiles will also help greatly in bringing down PREDATOR quicker.

The last type to be fought in the story is the real, actual Scavenger itself. It appears after you have destroyed Blue Magnolia for the 2nd time, along with a bunch of Ammon units. Like its ACV predecessor, it also emits bird-like noises and has the same weapons as the previous; the missile salvos and its rapid fire laser cannon shots. However, this version now has a new feature: a new distinct type of charge attack where the Scavenger rotates itself and abruptly lunges at the enemy while stretching its legs out, this attack can easily strip off 10k+ AP if it connects, so avoid this at all costs! In terms of durability, it has the same weaknesses as its predecessor: high KE resistance but low CE & TE resistance. Using high power H.E.A.T machine guns or battle rifles or pulse machine guns will put the Scavenger down easily.

In the Multiplayer Special Sortie, 5 of the Scavengers are fought. They comprise of 1 Scavenger, 2 Predator units and 2 Hunter units and are fought in the Galef Plant map. In this one, the 2 Hunter units will station themselves atop a very high building on the map while sniping away at the players, while the Scavenger and the 2 Predator units rush in on the team. The best strategy for this is to have a team with heavy-armor type ACs (heavy bipeds or tanks or quads) with lots of heavy weaponry. Having weapons such as autocannons, H.E.A.T machine guns, battle rifles or KE rifles will be very effective in bringing down the bosses. It is also recommended to eliminate the Predator units first as they are the toughest to deal with, followed by the Scavenger unit. Once the 3 of them are down, the team can then fully divert their attention to the sniping Hunter units. Converge on the 2 Hunter units and rain down fire on them and they will go down in no time. 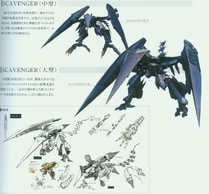 Scan data of a Hunter type in Verdict Day.

Scan data of a Predator type in Verdict Day.

PREDATOR
Add a photo to this gallery
Retrieved from "https://armoredcore.fandom.com/wiki/Scavenger?oldid=57302"
Community content is available under CC-BY-SA unless otherwise noted.