Wynne D. Fanchon is a Lynx appearing in Armored Core: For Answer. She is ranked #3 in Collared and is the Interior Union's main Lynx. She is famous across the battlefield for being an excellent Lynx who has never failed a mission. Her reputation has earned her the nickname "GA's disaster" and to many frontline soldiers, the "Brass Maiden". A proud Lynx, she despises those simply in the business for killing. Her craft, the NEXT Reiterpallasch, is lightweight but strikes hard.

Wynne D. is one of the new Lynx that sprang up after the Lynx War. She builds up a strong reputation throughout her career and even manages to place highly in Collared's ranks.

Wynne takes great pride in her work as a Lynx. She sets high standards for her fellow Lynx and has scorn for those whom she deems unworthy of the title. After defeating Don Colonel, Wynne openly mocks him for his poor performance. When Patch the Good Luck announces his surrender and begs for mercy, she calls him an idiot and condemns his actions.

Despite her pride as a mercenary, Wynne greatly dislikes those who kill needlessly and excessively. While she is not adverse to killing for the sake of her mission, she is angered by those who commit murder for the sake of it. This is shown when she choses to protect the Cradles out of her own free will, instead of being ordered by the Interior Union or the League. If she and Strayed successfully defeat ORCA in the League Path, Wynne rebukes Maximilian Thermidor and ORCA's reasons for their extremist actions. If she is unsuccessful in stopping the Closed Plan in the ORCA Path, her final words as she condemns Strayed's actions show that she sincerely cherishes life. Her dedication to this idealogy is enough to motivate her to team up with other high-ranking Lynx in a last-ditch attempt to stop an omnicidal Strayed and Old King in the Destruction Path.

She has also shown a soft spot for like-minded individuals. She thanks Strayed if they decide to help her protect the Cradles. She also has friendly banter with Roy Saaland and apologizes to him if she is defeated by Strayed before Roy in the ORCA Path.

Wynne D's NEXT, Reiterpallasch, is a lightweight Y11-LATONA model with hard hitting power. It is equipped with a lightweight KAPTEYN railgun, which ensures long-range firepower, a back-mounted GEMMA automatic pulse cannon to pressure enemies, an ACRUX Dual Hi-Laser cannon of tremendous power, and a high-powered ELTANIN laserblade, rounding out her craft. However, much like other lightweight units, the NEXT has limited defense power and is easily stunned, though its complement of energy weapons do destroy the majority of NEXTs, making Reiterpallasch a well-rounded NEXT with both speed and power, but lacking in defense.

The ACRUX can deal a large amount of damage even to NEXTs with high energy defenses. However, due to the high EN consumption of Wynne's weapons, it is less mobile than NEXTs such as Stasis, being unable to dodge as frequently. Reiterpallasch's low shell defense and stability mean that the craft is weak to most shell weapons and can be stunned easily by cannons and bazookas.

Wynne is known as "GA's Disaster" for Reiterpallasch's energy weapon arsenal that is effective against GA's machines which typically have low energy defenses and consequently for her many victories against them.[1]

She can be hired as a consort in "Defeat Wonderful Body" and "Defeat Unknown NEXT+No Count", taking 50% of mission completion compensation per mission. 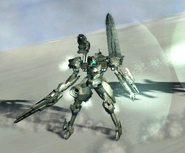 In-gameplay screenshot of Wynne D. Fanchon and her NEXT.

Wynne D. Fanchon's Next, Reiterpallasch as it appears during a mission briefing.

Retrieved from "https://armoredcore.fandom.com/wiki/Wynne_D._Fanchon?oldid=61532"
Community content is available under CC-BY-SA unless otherwise noted.